Gnome 3 and possible changes to the “System Status Area”

It 'available in a few days Gnome 2.30, this means that the next version will (the may be) Gnome 3 (which will include Gnome Shell). Wandering in the project are casually aware of some changes to the "System Status Area"That probably will come to life.

There is a possibility that in the "System Status Area” di Gnome 3 are used black and white icons "Ubuntu style” (or perhaps we should call them "Mac OSX style”).

Major changes will in all probability adopted by 'battery icon, that will clearly show which are the devices that consume battery. 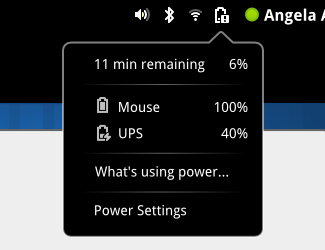 Another debate was created on where to place the button "minimize"In Gnome Shell (or even remove it). The button "minimize"Will no longer be what it has done so far (because now only moves the window pane "Activity"And the only way to restore the window is to click on"Activity”). The button for the closure will remain on the right, but there are suggestions about adding a new button on the left to move the window to another virtual desk.

It 'a glimpse of the suggestions and / or roadmap which.

Code openELEC: the best solution for your multimedia station… but it is legal?

We start talking about Kodi. Kodi Kodi is a simple and comprehensive software to transform traditional TV into a SmartTV with all the trimmings. It is an open source software and is compatible or more Read more…

Putting a program in the background with “screen”

Today we talk about screen: a small utility command line for Linux systems. Screen, quite simply, It is able to multiply the terminals at our disposal, to unhook a terminal by its own process and Read more…